More than 30% of non-metro children under 6 living in poverty, USDA study finds

ERS found that 48 counties had child poverty rates 50 percent or higher, with 41 of those counties in non-metro areas, 33 in the South and 10 in Mississippi, mostly in the Delta region. East Carroll County, Louisiana, had the highest rate, at 67.1 percent, followed by Clay County Georgia (65.2 percent), and Holmes County, Mississippi (62.1 percent).

"Child poverty is more sensitive to labor market conditions than overall poverty," the report said. "Scarcity of jobs, physical isolation and lack of employment and transportation services often pose greater earnings challenges for non-metro parents than for metro parents. Further, non-metro parents tend to have less education and a higher incidence of underemployment than do metro parents, putting their children at higher risk of being poor." (USDA map) 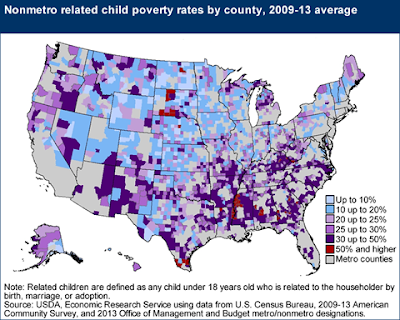