Marcellus Shale operations more likely to be in poor areas of Pennsylvania, but not Ohio, W.Va.

A study by researchers at Clark University in Worcester, Mass., that examined whether or not Marcellus Shale fracking operations in Pennsylvania, West Virginia and Ohio are more likely to be located in poor, rural areas, found that to be the case only in Pennsylvania. “Our analysis shows that environmental injustice was observed only in Pennsylvania, particularly with respect to poverty: in seven out of nine analyses, potentially exposed [census] tracts had significantly higher percent of people below poverty level than non-exposed tracts,” researchers wrote. 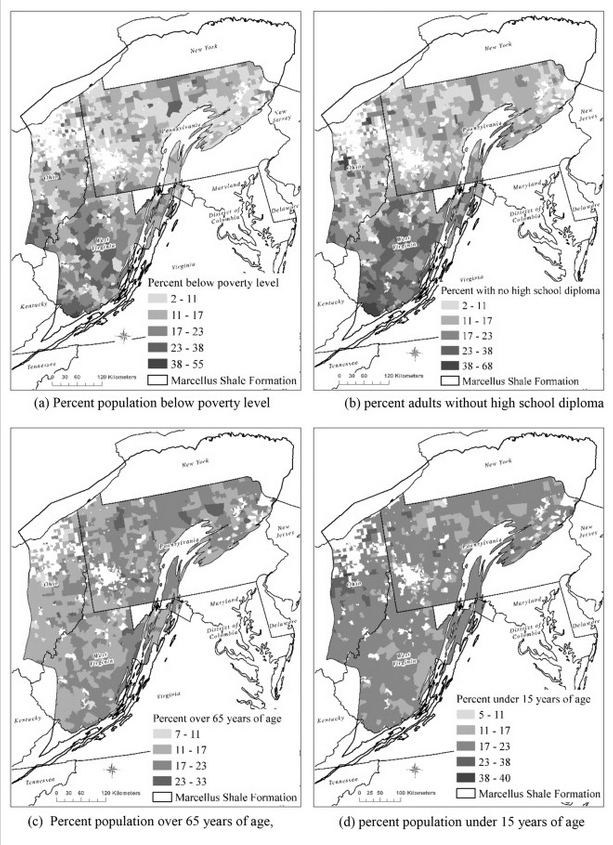 Researchers "mapped areas in Pennsylvania, West Virginia and Ohio to identify areas with a lot of Marcellus Shale hydraulic fracturing wells and then examined some local demographics: age, poverty and education levels and race," Brian Bienkowski reports for Environmental Health News. Lead author Yelena Ogneva-Himmelberger said that in poor Pennsylvania communities, "no matter how you estimate proximity, it always came up as exposure was significantly, much higher.” (Clark University graphics)

Ogneva-Himmelberger "said the study raises environmental justice concerns as people under the poverty line often 'have less mobility and access to information' about the potential ills of fracking, especially since the communities she looked at were rural areas without the amenities of larger cities and towns," Bienkowski writes. "She also found local clusters of gas wells disproportionately impacting the poor, elderly and those with lower education in West Virginia, and children in Ohio."
Written by Tim Mandell Posted at 5/06/2015 03:02:00 PM