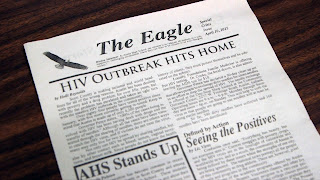 While a southeastern Indiana town continues to struggle with an HIV epidemic that has now reached 140 cases—there are only 4,300 residents in Austin—students at Austin High School realized that that HIV knowledge among their peers was almost non-existent. So they decided to do something about it through the power of the press.

Students "rushed to release a special edition of the student newspaper, The Eagle, that focused on the outbreak," Jason Kane reports for PBS Newshour. "Articles profiled at-risk residents, dispelled rumors and discussed the impact of the outbreak on the town. Students also started a group called 'Stand Up' to educate younger kids about the HIV virus and staying healthy."

Kami Owens, 16, wrote an editorial about the power of community and the media's false perceptions of Austin: “The media has done an astonishing job of showing the world the negatives of little Austin, Ind. But along with every negative, there is a positive. Austin may be a small town, but when tragedy hits, it affects all, and our close-knit town and community become family. . . . Appearance is not everything, folks. Austin is an older community that was established as a city only seven years ago. Austin has kept its small-town appearance that the residents seem to love. It emanates a homey feeling where everyone knows each other."
Written by Tim Mandell Posted at 5/05/2015 12:51:00 PM