A study by Measure of America called Geographies of Opportunity ranks how residents of the nation's 436 congressional districts fare in health, access to knowledge and living standards.

An affluent area "just south of San Francisco that includes high-end cities like Palo Alto and Los Gatos, along with the southern fringe of San Jose" was ranked as having the highest well being, while neighboring agricultural community San Joaquin Valley ranked last, Tim Marema reports for the Daily Yonder. Author Sarah Burd-Sharps said that "while rurality is one of the conditions that affects well being, it’s not an especially strong factor. Other factors like education levels explain more of the variance in the well-being report." (Measure of America map: Education index) 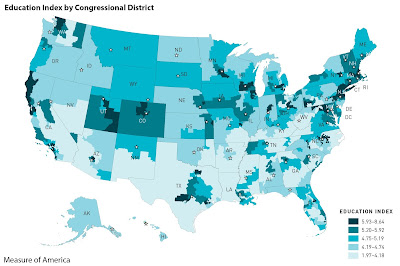 The report found that the bottom 10 congressional districts in terms of human development are all rural and urban centers in the South, while the top 10 are all major metropolitan areas. Burd-Sharps said this is primarily because large cities “benefit from public and private investment in things like good K-12 schools, research universities, parks and walkable streets,” while rural areas are less likely to receive the same investments, Marema writes.

Life expectancy ranges from a low of 73 in rural Southeastern Kentucky to a high of 84 in San Jose and part of Santa Clara County in California. Whites outlive African Americans by 3.6 years, and "the higher the proportion of foreign-born residents in a congressional district, the longer the district’s life expectancy," the report says.

"There are over 5.5 million disconnected youth in the United States—young people between the ages of 16 and 24 who are out of work and out of school," largely concentrated in the South and Southwest, says the report. (Measure of America map: Life expectancy) 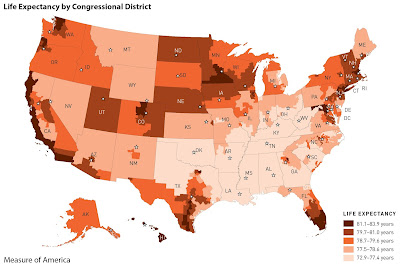