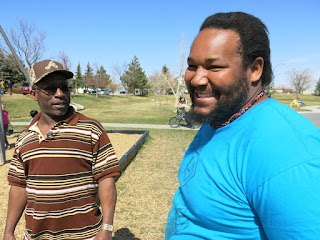 African American Steve Marsh, who moved from Chicago to Gillette to work in the oil industry, told Patterson, "When I first got here, if every time you stepped into a restaurant, you feel five, six, seven, eight eyes on you and then you look back and they look away and then other people from the table are still looking. It's uncomfortable, to say the least."

Ivan Pettigrew, who moved from Atlanta to Wyoming, said most people have been friendly, Patterson writes. But the oil business has struggled recently, and jobs are not as easy to find. Pettigrew told Patterson, “In 2009 and 2010, you could basically lose your job one day and start working again the same day or the next day. Now it's not that easy."

Marsh said if jobs dry up he would like to return to the city, but Ray Stewart, Pettigrew's stepson and a native of Shreveport, La., said he has no plans to leave, Patterson writes. Stewart told Patterson, “I would definitely stay. I like the community. Within the five years I've been here I met my wife. I like it here." (Read more)
Written by Tim Mandell Posted at 5/05/2015 12:51:00 PM