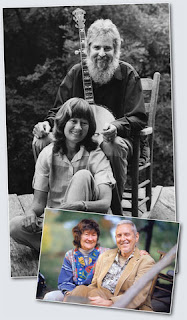 Guy Carawan, a folk singer and activist who fight for civil writes and worker's rights in Appalachia and the South, died on Saturday at 87 in New Market, Tenn., Lance Coleman reports for the Knoxville News-Sentinel. Carawan and his wife Candie "marched with Martin Luther King through the streets of Selma, Ala.," and "introduced the song 'We Shall Overcome' to the movement." (News-Sentinel photos: Guy and Candie Carawan)

"The couple and their children lived with and documented the people and stories of Johns Island, S.C., and preserved those stories in books and recordings," Coleman writes. "They also worked with coal miners and others in union battles while recording their own albums of songs."