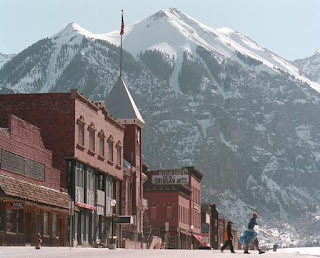 A group of 11 Western communities in Utah, Colorado and New Mexico known as the Mountain Pact "are launching a campaign that targets the coal industry, seeking hundreds of millions of dollars a year from companies to help communities adapt" to the effects of climate change, Bruce Finley reports for The Denver Post. The towns "contend that because coal is a major source of heat-trapping greenhouse gases linked to climate change, the industry should pay more to help deal with the impact." (Post photo: Telluride, Colo.)

The towns, which consist of 250,000 permanent residents and attract 40 million visitors per year, this week sent a letter to Secretary of the Interior Sally Jewell that states: "The costs of adapting to a changing climate are rising, but at the same time coal companies are taking advantage of gaping loopholes that allow them to pay less, thus depriving many western states (and taxpayers across the country) their fair share of the revenues from coal leased on federal land.

We support your proposal to close the regulatory loophole, stop the exploitation of taxpayer owned federal lands and eliminate current benchmarks used to value these transactions. Over the past 30 years, the government’s undervaluation of coal may have cost taxpayers upward of $30 billion in lost revenue. Western states need this money for local schools, roads and other priorities. This much-needed reform will generate increased revenue for states in which the coal is mined and help level the playing field in other U.S. coal markets by ensuring that everyone is playing by the rules."

Colorado Mining Association president Stuart Sanderson rejected the notion of loopholes, Finley writes. Sanderson told him, "It would be inappropriate to increase royalty rates for an industry already suffering from production losses and lost jobs due to flawed state and federal laws and regulations designed to drive cole out of the energy mix. The best way to increase royalties is to increase sales and production and remove disincentives to coal use engineered by government."