Rural grocery store owners in Minnesota and North Dakota are facing the same fears as similar owners in other states—that competition from chain stores that offer cheaper prices will force them out of business, Grace Lyden reports for The Forum of Fargo‑Moorhead. Closing grocery stores could turn the community into a food desert and harm elderly residents who rely on deliveries. Karen Lanthier, the Regional Sustainable Development Partnerships assistant program director for sustainable local foods, said in a news release, "Grocery stores are the primary source of healthy food. When they close, consumers face serious access challenges and in some cases rely on less-healthy food as part of their diet."

A survey released this month by the University of Minnesota Regional Sustainable Development Partnerships and the Minnesota Center for Survey Research found that 34 percent of rural Minnesota grocery store owners expect to no longer own the store in five years. Twenty-eight percent of stores have customers who travel 30 or more miles to shop, and 61 percent of respondents said the nearest discount grocery store was 20 or more miles away, with only two percent saying there was one was less than 10 miles away. 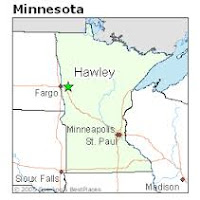 "Almost all of those grocers said high operating costs and narrow profit margins were challenges for their business, and 29 percent said their most significant challenge was competition with large chain grocers," Lyden writes. That's a problem Tony Laddusaw, who owns a local store in in Hawley, Minn., (Best Places map) can understand. "Unlike his peers, Laddusaw has seen business grow in recent years, thanks to the swelling population of Fargo-Moorhead about 20 miles west. But Hawley's nearness to the metro area also means potential patrons often bypass the local store in search of a better deal." Hawley, who bought the store from his parents in 1999, told Lyden, "We're losing probably 35 percent of the business to Fargo-Moorhead, and it's convenient for people because they work there."

A 2014 survey of 53 grocers conducted by the North Dakota Association of Rural Electric Cooperatives found that "more than 40 percent of rural grocers said narrow profit margins were a major challenge for their stores," Lyden writes. "About two-thirds said they were challenged by the availability of satisfactory labor, and more than 80 percent said a major challenge was residents shopping out of town." Laddusaw said in a good year profit margins are about 3 percent. He told Lyden, "That's why there aren't that many grocery stores anymore because people can't survive on that 3 percent net." (Read more)
Written by Tim Mandell Posted at 3/29/2016 01:44:00 PM