Beware of GPS and Google Maps; you might end up at the wrong location or invade the wrong country 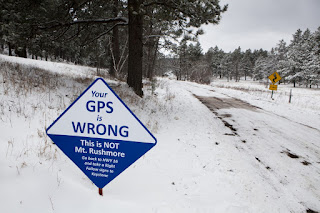 Flawed GPS and Internet maps are leading drivers to the wrong destinations, Karen Turner reports for The Washington Post. "A Google Maps error has been sending tourists seeking 'Mt. Rushmore, SD' to the wrong location for nearly five years now. Storm Mountain Center, a retreat center located some 13 miles from the real Mt. Rushmore, has repeatedly asked Google Maps to update the Mt. Rushmore address. Eventually, the center has resorted to installing a large sign (Rapid City Journal photo by Sean Ryan) at the front of their driveway instructing travelers that their electronic devices are wrong about Mt. Rushmore’s location. But whatever fixes proved temporary for unknown reasons—and as of this writing, the address is still wrong."

"Although Google Maps is fast becoming the ultimate authority on navigation, the program is proving vulnerable to mistakes and hackers with results that at times can be catastrophic," Turner writes. "One of the latest blunders involved a company accidentally bulldozing the wrong house due to faulty Google Maps directions. Google took responsibility for the maps error. In this case, two different houses were shown as being in the same location, a Google spokeswoman told CNN. In 2010, Nicaragua blamed an accidental invasion of Costa Rica on incorrect Google Maps information."

"These cases shed light on the software's susceptibility to errors and hacks," Turrner writes. "Google Maps is built on layers of information obtained from satellite images as well as photographs taken by Street View cars, which have driven and photographed more than 7 million miles of roads. Google also crowdsources location information through Map Maker, which allows users to directly update local addresses and details. An unknown number of people are employed by the company to comb through these maps for inaccuracies. But despite this multi-faceted system, location bugs and mistakes still happen. Trolls and pranksters have taken advantage of the crowdsourced feature by changing businesses to offensive names or by doodling on the map interface."

McGill University conducted research that "compared the brains of GPS versus non-GPS users and found that non-GPS users had more grey matter and higher functionality in their hippocampuses than those that relied on their devices," Turner writes. "Veronique Bohbot, a neuroscientist who worked on McGill's GPS study, suggests that we limit our GPS use to new destinations only and attempt to build up our cognitive maps by navigating to frequently visited destinations on our own, she said in an article on Phys.org."
Written by Tim Mandell Posted at 4/01/2016 01:07:00 PM