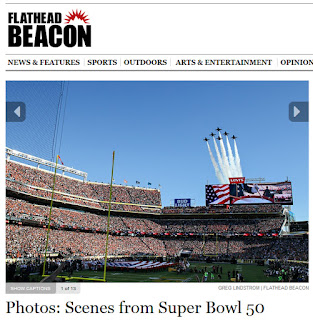 Maury Povich might be best known for his daytime talk show's recurring theme of paternity test results and guests embarrassing themselves with their wild antics. But not as many people might know that Povich and his wife, newswoman Connie Chung, own a free weekly tabloid in Montana that has become one of the state's most well respected publications, Heidi Gaiser reports for Columbia Journalism Review. The Flathead Beacon grew from a staff of seven publishing 24 pages in 2007 to a staff of 20 publishing 25,000 copies of 64 pages each week. The website also sees about 100,000 unique visitors each week. Povich and Chung have owned a home in the area since 1998. (Beacon photo by Greg Lindstrom: Not many weeklies would send a reporter and photographer to the Super Bowl, especially to cover an athlete who wasn't expected to even play)

"The Beacon has also earned numerous Montana Newspaper Association Awards, six times being named the state’s best large weekly, with four wins for best website," Gaiser writes. "Carol Van Valkenburg, who taught for 30 years at the University of Montana’s journalism school, calls the Beacon 'the best newsroom in Montana.'" Van Valkenburg said of Kellyn Brown, who was hired to launch the paper, “The paper does excellent journalism, and Kellyn has created a vibrant work environment. He’s made journalism fun again. I’ve sent a lot of reporters his direction, and they have thrived.”

"The Beacon’s editorial formula is a mix of in-depth pieces using bold photos and sophisticated graphics, plus a print wrap-up of the week in local news in charts, numbers and short stories," Gaiser writes. "Outdoor recreation, natural resources and the area’s relationship with Alberta, Canada, are all regular parts of the coverage mix." It also helps to have financial backing. Reporter Dillon Tabish told Gaiser, “Maury and Connie really emphasize that the Beacon should be a must-read every week. They put their money where their mouth is by giving us the opportunities and resources to make that possible.”

The Beacon sent journalists to San Francisco to cover local native and Denver Broncos backup quarterback Brock Osweiler in the Super Bowl, it has a current story on local students building robots and using drones for STEM skills and a story on scientists presenting aquifer research at a local community college.
Written by Tim Mandell Posted at 3/29/2016 01:44:00 PM