Sales of soda—especially diet drinks—have hit a 30-year low, according to Beverage Digest, an industry tracker. Total volume of soda consumed in 2015 was down 1.2 percent, "an acceleration from 2014’s 0.9 percent drop," John Kell reports for Fortune. "The group also reported that annual per capita consumption of carbonated soft drinks dropped to about 650 eight-ounce servings in 2015—the lowest since 1985."

PepsiCo took the biggest overall hit, with sales declining 3.1 percent in 2015. More Americans are shying away from diet drinks, not the higher calorie choices linked to higher rates of obesity, which is especially problematic in many rural areas. Diet Pepsi and Diet Coke each reported declines of more than 5 percent, while Diet Mountain Dew’s drop was 4.8 percent. 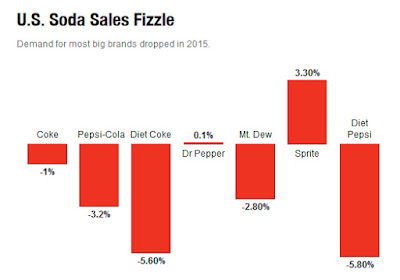 Declining diet sales are blamed on consumers "becoming increasingly skeptical of artificial sweeteners, most recently fretting about the health implications of consuming aspartame, which is still deemed safe by the Food and Drug Administration," Kell writes. "Another beverage category that soared in 2015 was bottled water, which is counted in the broader 'liquid refreshment beverages' channel. Dasani, Aquafina and Poland Spring reported volume increases ranging from 6.5 percent to 11.4 percent. The growth for Aquafina was so strong that it helped lift the brand back to the top 10 'Megabrand' list. It ranked ninth last year, pushing Arizona off the list." (Read more)
Written by Tim Mandell Posted at 3/31/2016 12:50:00 PM