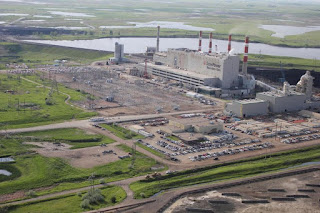 SaskPower's Boundary Dam—the world's first-ever carbon capture project on a large coal plant—"was equipped with a technology that promised to pluck carbon out of the utility’s exhaust and bury it underground, transforming coal into a cleaner power source," Ian Austen reports for The New York Times. "In the months after opening, the utility and the provincial government declared the project an unqualified success. But the $1.1 billion project" has seen rising costs, "requiring tens of millions of dollars in new equipment and repairs." (Reuters photo: The Boundary Dam Power Station in Saskatchewan, the first commercial-scale carbon capture and storage project at a coal-fired plant)

"The project has been plagued by multiple shutdowns, has fallen way short of its emissions targets, and faces an unresolved problem with its core technology," Austen writes. "A chart covering the first year of operation showed that the system often didn’t work at all. When it was turned back on after shutdowns for adjustments and repairs, the amount of carbon captured sometimes even dropped." Repeated shutdowns have caused the Saskatchewan utility to miss multiple carbon-dioxide deliveries to the Canadian oil company that signed a 10-year contract with the utility to buy most of the gas, leading "7 million Canadian dollars in penalties, offsetting most of the 9 million Canadian dollars in payments received."

Confidential documents unveiled in November in the provincial legislature and authenticated by the government "showed that the system was working at only 45 percent of capacity," Austen writes. "One memo, written a month after the government publicly boasted about the project, cited eight major problem areas. Fixing them, it said, could take a year and a half, and the memo warned that it was not immediately apparent how to resolve some problems."

SaskPower and advocates for carbon capture "argue that the setbacks are typical teething problems associated with any new and complex technology," Austen writes. But "the carbon system is a voracious consumer of the electricity generated by Boundary Dam, which has 150 megawatts of capacity." Mike Marsh, the chief executive of SaskPower, "testified that about 30 megawatts of capacity were consumed by the system and an additional 15 to 16 megawatts were needed to compress the carbon dioxide. The utility cut its emissions reduction target for this year to 800,000 metric tons, from one million."
Written by Tim Mandell Posted at 3/30/2016 01:37:00 PM