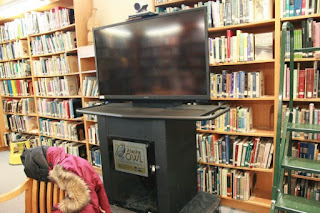 Twenty-four libraries in rural Alaska say they will "go dark" under proposed state budget cuts that eliminate "a state subsidy that supports fast Internet in rural Alaska public libraries," Lisa Demer reports for Alaska Dispatch News. Lawmakers are trying "to address a budget gap approaching $4 billion." The rural Internet program, Online With Libraries (OWL), "costs the state about $760,000 and draws four times that from the federal government." (Demer photo: This videoconferencing system in the Bethel consortium library was purchased OWL)

OWL "covers on average 19 percent of the broadband cost at the small, rural Alaska libraries that participate in the program, and the federal government picks up 79 percent through its e-rate subsidy, which is funded through surcharges on telecommunications bills, according to the Alaska Library Association," Demer writes. "Just 2 percent of the costs are paid by local communities. In all, 40 communities currently receive funding for the Internet through the program. Some say they would pick up the difference of what the state would have spent. Another 45 libraries use the OWL program’s videoconferencing network for training, meetings and classes."

Librarians are organizing to save the program, which they say has dramatically changed who comes to libraries and how libraries are used, Demer writes. While the state's urban areas have plenty of places that offer Wi-Fi, "rural Alaskans without home Internet often rely on computers in public libraries for essentials, said Katie Baxter, director of the Kodiak Public Library and chair of the advocacy committee of the Alaska Library Association." Linda Thibodeau, a retiring official who oversees the state library, told Demer, “Without public Wi-Fi, in a lot of places people live on subsistence and can’t afford to have their own devices. If local communities cannot afford the local share without OWL help, then they don’t have broadband. They don’t have Internet." (Read more)
Written by Tim Mandell Posted at 3/31/2016 12:50:00 PM