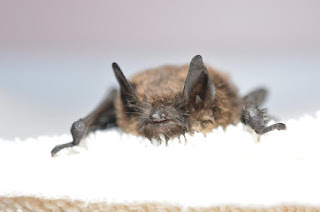 White nose syndrome, a disease that has killed an estimated seven million bats, has for the first time been reported on the West Coast, in North Bend, Wash., about 30 miles outside Seattle, Lewis Kamb reports The Seattle Times. "The first detection of the disease in a Western state represents 'somewhat of a game-changer,' said Jeremy Coleman of the U.S. Fish and Wildlife Service. The closest state with confirmed detection of the fungus is Nebraska, about 1,250 miles away, officials said." (Progressive Animal Welfare Society photo)

The disease, which gets its name "from the powdery, white substance that appears around muzzles, ears and wings of affected bats, has swept across 28 states and five Canadian provinces," Louis Sahagun reports for the Los Angeles Times. "White-nose syndrome has killed mostly little brown bats, which have lost more than 20 percent of their population in the northeastern U.S. over the past nine years. Mortality rates among colonies of some species in eastern states, such as northern long-eared bats, have reached 99 percent."

"Bats feast on such night-flying insects as mosquitoes, which transmit West Nile virus, and agricultural pests damaging to cotton and corn crops," Sahagun writes. "They also pollinate plants, including the saguaro cactus. The current value of pest control provided by bats each year is at least $3.7 billion nationwide."
Written by Tim Mandell Posted at 4/01/2016 01:08:00 PM