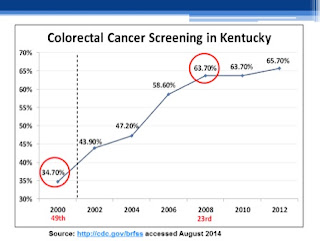 Another problem is that statewide bans of smoking in public places have been largely unsuccessful, with two-thirds of residents living in areas with no such bans. While the state expanded Medicaid under its former Democratic governor, newly-elected Republican Gov. Matt Bevin has sought to change the state's program.

"In the seven years following this new focus on colorectal cancer, the screenings rates nearly doubled, from 34.7 percent of the age-eligible population receiving screenings to 63.7 percent," Perry writes. "This raised Kentucky’s rank from 49th in the country to 23rd compared to other states. No other state has had such a dramatic increase in colorectal screenings in such a short period of time. As a result, the lives of many Kentuckians have been saved: the incidence rate for colorectal cancer is down nearly 25 percent, and the mortality rate has dropped 30 percent. Through colorectal screenings, doctors can find precancerous lesions and remove them before they become cancer. Screenings also allow physicians to find these cancers at an earlier stages, when they are more likely to respond to treatment." 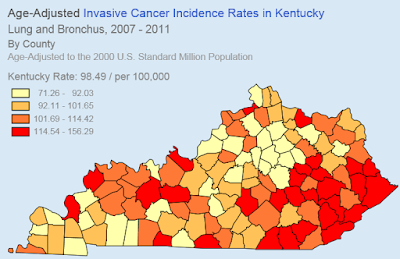 In Kentucky "the challenge is to not only encourage certain lifelong smokers to get screened, but to get them to quit, and for others to never start," especially because of the addictive nature of smoking, Judd reports. "It will be even more difficult than changing the profile of colon cancer because smoking involves addiction. The hope of public health officials is that the model used to bring down colon cancer deaths can be used to the same effect, not only for lung cancer but for other diseases plaguing this depressed swathe of America."
Written by Tim Mandell Posted at 3/28/2016 01:33:00 PM