About seven million people in the U.S. live and work in areas "with potential for damaging shaking from induced seismicity," says a report released Monday by the United States Geological Survey that for the first time includes maps identifying "potential ground-shaking hazards from both human-induced and natural earthquakes," Jessica Fitzpatrick and Mark Petersen report for USGS. "In the past, USGS maps only identified natural earthquake hazards. This is also the first one-year outlook for the nation’s earthquake hazards and is a supplement to existing USGS assessments that provide a 50-year forecast."

Petersen, Chief of the USGS National Seismic Hazard Mapping Project, said, “By including human-induced events, our assessment of earthquake hazards has significantly increased in parts of the U.S. This research also shows that much more of the nation faces a significant chance of having damaging earthquakes over the next year, whether natural or human-induced.” (USGS map) 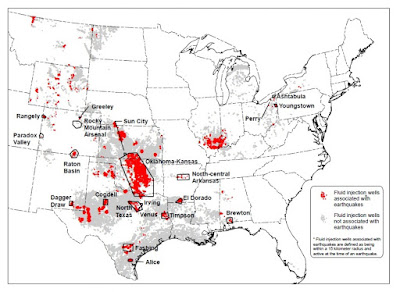 "The list of places at highest risk of man-made earthquakes includes Oklahoma, Kansas, Texas, Arkansas, Colorado, New Mexico, Ohio and Alabama," Joel Achenbach reports for The Washington Post. "Most of these earthquakes are relatively small, in the range of magnitude 3, but some have been more powerful, including a magnitude 5.6 earthquake in 2011 in Oklahoma that was linked to wastewater injection."

Scientists said "they do not know if there is an upper limit on the magnitude of induced earthquakes; this is an area of active research," Achenbach writes. "Oklahoma has had prehistoric earthquakes as powerful as magnitude 7. It's not immediately clear whether this new research will change industry practices or even whether it will surprise anyone in the areas of newly estimated risk. In Oklahoma, for example, the natural rate of earthquakes is only one or two a year, but there have been hundreds since fracking and horizontal drilling, with the associated wastewater injection, became commonplace in the last decade."
Written by Tim Mandell Posted at 3/29/2016 01:44:00 PM