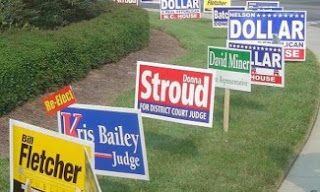 Do lawn signs actually have an impact on political elections? A study by researchers at five U.S. colleges published in Science Direct found that signs on average increase vote share by 1.7 percentage points. The study, by researchers at Columbia University, Binghamton University, Knox College, High Point University and Old Dominion University, looked at lawn signs planted in random locations for "a congressional candidate, a mayoral candidate, an independent expenditure campaign directed against a gubernatorial candidate, and a candidate for county commissioner," finding that "signs increased advertising candidates’ vote shares. Results also provide some evidence that the effects of lawn signs spill over into adjacent untreated voting precincts."

Lauren Leatherby of Journalist's Resource, writes, "The results from each of the four individual experiments were not, on their own, statistically significant. But the researchers were able to draw general conclusions after pooling the average results of the four experiments. While lawn signs appear to have a modest effect on voting outcomes, they could, theoretically, provide an edge in certain tight elections. The authors suggest that future studies use a larger sample size and look more closely at how this campaign strategy might influence voter behavior in neighboring precincts." (Read more)
Written by Tim Mandell Posted at 3/29/2016 01:44:00 PM