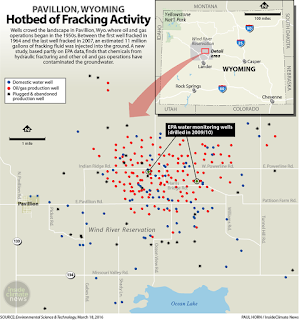 A study by researchers at Stanford University published in Environmental Science & Technology found that hydraulic fracturing from oil and natural gas operations contaminated groundwater in the area around Pavillion, Wyo., Neela Banerjee reports for InsideClimate News. The Environmental Protection Agency recently criticized a report by the Wyoming Department of Environmental Quality that said fracking likely played little role in polluted water wells in the area. A 2011 EPA study linked fracking to water contamination in the area. (InsideClimate News graphic)

"The Stanford study identified chemicals in Pavillion's water related to substances that companies reported using in local fracking operations and acid stimulation, an oil and gas production method," Banerjee writes. "Researchers also found that energy companies frequently fracked at much shallower depths than previously thought, sometimes very close to drinking water wells. In addition, companies fracked into underground sources of drinking water, or USDWs, defined under federal law as aquifers that could supply a public water system. Fracking into USDWs is legal, but the oil and gas industry has long insisted that fracking occurs far deeper than where aquifers are located."

"Researchers found that because of Pavillion's distinct geology, where natural gas often exists alongside water, hazardous chemicals could migrate from fracking zones along fissures into the aquifer," Banerjee writes. "Faulty cement barriers around the steel casing inside an oil or gas well also create the potential for fracking chemicals to seep underground. Finally, as many as 44 unlined earthen pits were used before 1995 for disposal of diesel- and chemical-laced fluids from drilling and production. Tests of nearby groundwater showed dangerous concentrations of diesel-related and volatile organic compounds, such as benzene, a known carcinogen, and the neurotoxin toluene." (Read more)
Written by Tim Mandell Posted at 3/30/2016 01:34:00 PM