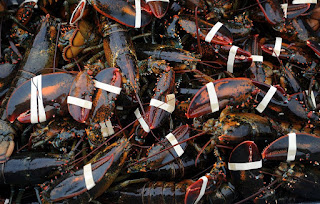 A proposal by Sweden for the European Nation to list American lobsters, also known as Maine lobsters, as invasive species could ban exports from the U.S. and Canada to 28 countries, costing the industry $150 million a year, including $10.6 million in Maine, Matt Byrne reports for the Portland Press Herald.

"Swedish scientists have said that 32 American lobsters have been found in that nation’s waters in the past eight years and that the species poses a risk of disease and health problems for native European lobsters," Byrne writes. But language in the risk-assessment report by Sweden’s agency for marine and water management "suggests the proposed ban may be motivated by a desire to expand the European lobster fishery, said Annie Tselikis, director of the Maine Lobster Dealers’ Association." She said the report states: “It should be stressed that a ban on live imports would potentially be beneficial in terms of profits and jobs if the commercial fishery of Homarus gammarus (European lobster) is positively affected by the ban."

American scientists have "said they were skeptical of Sweden’s rationale, which identified three diseases it considers the biggest threat to European lobsters: epizootic shell disease, gaffkemia or 'red-tail,' and white spot syndrome. Robert Bayer, executive director of the University of Maine’s Lobster Institute, said there is no scientific basis for Sweden’s proposed ban. Shell disease, a fatal bacterial infection, has been shown not to be contagious, he said," Byrne writes. "Red-tail, also caused by bacteria, has not been seen in American lobster in a decade. And white spot syndrome affects only shrimp, not lobsters, Bayer said." (Read more)
Written by Tim Mandell Posted at 4/01/2016 01:08:00 PM