$3.5B to get broadband to 7M rural Americans will benefit only a few hundred thousand, Politico finds

Billions of federal dollars that were supposed to connect rural America to high-speed Internet were never used for that purpose, Tony Romm reports for Politico. In 2011 the Rural Utilities Service announced $3.5 billion in aid as part of the 2009 economic stimulus package to bring high-speed Internet to 7 million rural Americans in the hardest-to-reach areas of the country, while also providing connection to more than 360,000 businesses and more than 30,000 critical community institutions like schools, health-care facilities and public safety agencies.

"RUS never found its footing in the digital age," Romm writes. "Sometimes, RUS ignored its rural mission by funding high-speed Internet in well-wired population centers. Sometimes, it chose not to make any loans at all. Sometimes, RUS broadband projects stumbled or failed for want of proper management; loans went delinquent, and some borrowers defaulted. Yet despite years of costly missteps that left millions of Americans stranded on the wrong side of the digital divide, a stable of friendly lawmakers swallowed their doubts about RUS and made sure the politically protected agency wasn’t cut out of the historic stimulus effort." (5W Infographics graphic; click on it for larger version) 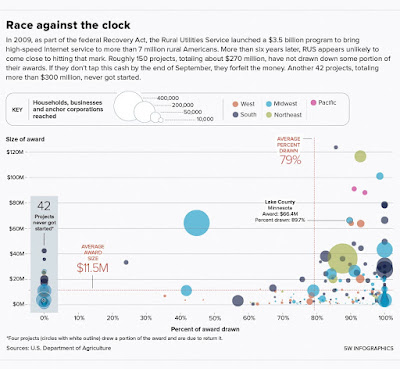 A Politico investigation "found that roughly half of the nearly 300 projects that RUS approved as part of the 2009 Recovery Act have not yet drawn down the full amounts they were awarded," Romm reports. "All RUS-funded infrastructure projects were supposed to have completed construction by the end of June, but the agency has declined to say whether these rural networks have been completed. More than 40 of the projects that RUS initially approved never got started at all, raising questions about how RUS screened its applicants and made its decisions in the first place."

"But a bigger, more critical deadline looms for those broadband projects still underway: if these networks do not draw all their cash by the end of September, they will have to forfeit what remains," Romm writes. "In other words, they altogether may squander as much as $277 million in still-untapped federal funds, which can’t be spent elsewhere in other neglected rural communities."

"And either way, scores of rural residents who should have benefited from better Internet access—a utility that many consider as essential as electricity—might continue to lack access to the sort of reliable, high-speed service that is common in America’s cities," Romm writes. "Even RUS admits it’s not going to provide better service to the 7 million residents it once touted; instead, the number is in the hundreds of thousands." (Read more)
Written by Tim Mandell Posted at 7/28/2015 04:56:00 PM