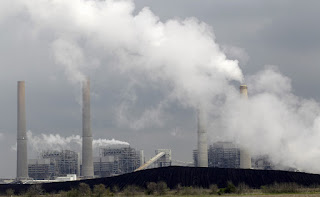 A federal appeals court on Tuesday upheld the Environmental Protection Agency's right to impose clean-air standards but ordered the agency "to relax some limits it set on smokestack emissions that cross state lines and taint downwind areas with air pollution from power plants" in 13 states, mostly in the South and Midwest, Matthew Daly reports for The Associated Press. "The ruling follows a Supreme Court decision last year upholding the so-called Cross-State Air Pollution Rule, which blocks states from adding to air pollution in other states." (AP photo by David J. Phillip: exhaust rises from smokestacks in front of piles of coal in Thompsons, Texas)

The court told EPA "to redo sulfur-dioxide and nitrogen-oxide standards" in the 13 states, meaning that "Texas and South Carolina would see limits for both forms of pollution adjusted, while new limits for either sulfur dioxide or nitrogen oxides would be set in 11 other states: Alabama, Florida, Georgia, Maryland, New Jersey, New York, North Carolina, Ohio, Pennsylvania, Virginia and West Virginia," Daly writes. EPA’s "rule imposed overly strict limits on the 13 upwind states," and "the limits would result in downwind states' 'overachieving' air quality standards for harmful pollutants," the court said. (Read more)

EPA is also expected on Monday to announce it is giving states an extra two years—until 2022—to begin complying with proposed rules to reduce carbon-dioxide emissions by 30 percent by 2030 from existing power plants based on emission levels from 2005, Emily Holden and Rod Kuckro report for EnergyWire.