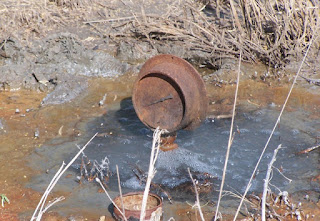 Groundwater conservation districts in Texas, who are struggling to track new permits for the state's more than 7,500 wastewater disposal wells used in oil and gas operations, want to change existing rules to require "energy companies to notify them directly when they apply to drill new wells," Jim Malewitz reports for The Texas Tribune. The Texas Railroad Commission and industry groups say current rules are good enough and point to an online database of permits that anyone can check. (Wintergarden Groundwater Conservation photo: This 2011 spill spewed hydrocarbons onto ranchland in Dimmit County. Some experts linked the "breakout" to nearby oilfield waste injections.)

"Texas law requires some notification," Malewitz writes. "Disposal well applicants must directly notify landowners bordering the proposed waste site and the relevant county clerk. Anyone else interested must scour local newspapers for one-column notices with a few details: the company’s name, the well’s depth and a vague description of its location (eight miles northeast of Carrizo Springs, for example)."

Conservationists argue that it's time-consuming to scour newspapers for notices and are asking drillers and regulators to drop them a note of a new well application, even in the form of an email, Malewitz writes. "But industry groups, which call disposal wells safe, say such a change is unnecessary."

"Last legislative session, state Sen. Carlos Uresti offered Senate Bill 517, which would have required drillers to notify groundwater districts within 10 miles of a proposed well," Malewitz writes. "The bill failed to draw a hearing amid pushback from several petroleum interests, including the Texas Oil and Gas Association, the Texas Independent Producers and Royalty Owners Association and Marathon Oil."