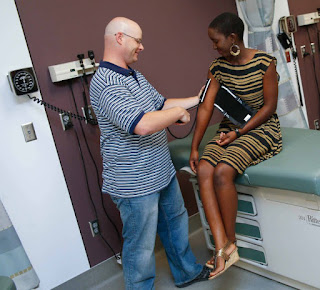 Nebraska hopes to fill a need for rural medical professionals through the University of Nebraska at Kearney Health Science Education Complex, which will open this fall to "begin educating future health care professionals with expertise in rural health issues," Sara Giboney reports for the University of Nebraska Kearney. (UNK photo by Corbey R. Dorsey: nursing students use the skills and assessment lab)

The new facility, along with a new building in Lincoln and the 2010 addition of the Northern Division at the College of Nursing at the University of Nebraska Medical Center in Norfolk and the Center for Nursing Science in Omaha, "will yield approximately 620 new Bachelor of Science in Nursing graduates by 2020," Giboney writes.

By 2022, "the increased demand in health care positions will result in the need for 7,015 registered nurses, nearly 347 nurse practitioners, 434 physician assistants, 810 physical therapists, 521 radiographers and 166 diagnostic medical sonographers," says the Nebraska Department of Labor, Giboney writes. The Nebraska Center for Nursing estimates a shortage of nearly 4,000 registered nurses by 2020.