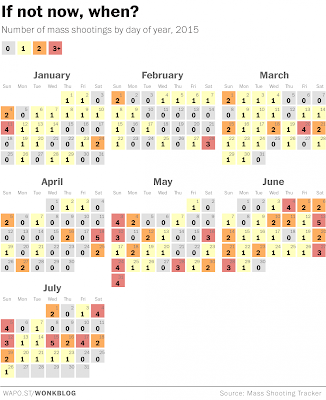 Following a shooting death that makes national news—such as the one in June in Charleston, S.C., that left nine dead and the one last week in Lafayette, La., that resulted in two deaths and nine injuries—talk of gun-control laws often come up. Supporters point to the incident as reason why stricter laws are needed, while critics say it's not a good time to discuss the issue when emotions are high after a tragedy.

While it probably rings true that emotions should be discarded from important debates, that means it's never a good time to talk about gun-control, according to figures from a website called Mass Shootings Tracker, a crowd-sourced tally of mass shootings maintained by the GunsAreCool subreddit, which says that the U.S. hasn't gone more than eight days in 2015 without a shooting incident, Christopher Ingraham reports for The Washington Post. The website provides a list of every shooting this year, with several incidents occurring in rural areas.

"We've averaged exactly one mass shooting per day since the start of the year," Ingraham writes. "Forty eight days saw more than one mass shooting take place. On 18 days there were at least 3 shootings. On three days this year —April 18, June 13 and July 15—there have been five shootings." It has to be noted that the website classifies a mass shooting as four or more people injured by gunfire, while the federal government's version says three or more people killed by gunfire, meaning the government doesn't consider the incident in Lafayette as a mass shooting.

"In the end, it often seems that the goal is to put off the conversation about the role of guns in America or quibble about methodology while the number of people killed or injured by guns rises," Ingraham writes. "On the other hand, some people, like the Telegraph's Dan Hodges, argue that we've already had the conversation and that it's already over. They may be right." (Read more)
Written by Tim Mandell Posted at 7/28/2015 04:55:00 PM