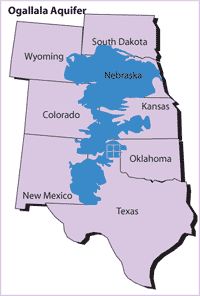 Farmers and ranchers in the Great Plains are pumping water faster from the Ogallala Aquifer—which covers 174,000 square miles in eight states—than it can be naturally replenished, putting Western Kansas' water source in danger of drying up, Lindsay Wise reports for McClatchy Newspapers. The Ogallala, which is Western Kansas' only significant water source, replaces less than one inch for every 10 inches pumped out. Once it empties, it would take 6,000 years to naturally refill. (USDA map)

"The vast freshwater reservoir beneath the prairie formed 5 million to 10 million years ago as streams draining from the Rocky Mountains deposited water in the clay, sand and gravel beneath the Great Plains," Wise writes. "The water lay there undisturbed for epochs until enterprising homesteaders who settled the West discovered the liquid bonanza that would make their arid land bloom. Now, in a geological blink of an eye, the Ogallala, which made the Great Plains the nation’s breadbasket, is in peril."

"The disappearing water supply poses a twofold danger," Wise writes. "It could end a way of life in a region where the land and its bounty have been purchased by the toil and sweat of generations of farmers. It also threatens a harvest worth $21 billion a year to Kansas alone and portends a fast-approaching—and largely unstoppable—water crisis across the parched American West."

Farmers are turning to "cutting-edge technologies to make the most efficient use of the water they have left," Wise writes. "They’re contemplating something almost unimaginable just a generation ago: voluntary pacts with their neighbors to reduce irrigation. And many are investing their long-term hopes in an astronomically expensive water transportation project that isn’t likely ever to be built."

"The Arkansas River, which once flowed out of Colorado into western Kansas, is nothing but a dry ditch now, its riverbed reduced to a rugged obstacle course for all-terrain vehicles," Wise writes. "And average rainfall here is just 14 to 16 inches a year, nowhere near enough to replace the water that farmers draw from the Ogallala." (Read more)
Written by Tim Mandell Posted at 7/27/2015 04:53:00 PM