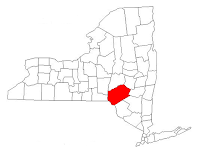 While some state and local governments have taken down Confederate flags in light of the June shooting deaths of nine Africans Americans in a historic Charleston church, officials in Delaware County, New York, (Family Search map) say they have no intention of banning such merchandise at the county fair, set to run from Aug. 17-22, Robert Cairns reports for Watershed.

After the New York State Fair issued a Confederate flag ban, Leslie Kauffman, a 4-H club leader and a co-superintendent of the rabbit barn at the Delaware County Fair, asked the Delaware Valley Agricultural Society, which governs the local fair, to pass a similar ban locally.

Board members declined the request, saying vendors had already signed contracts with the fair and it was too late to make changes, Cairns writes. When asked about Confederate flags during the meeting, board member Norm Kilpatrick said, “The more of them, the better," and board director Niles Wilson said, “It's just part of history . . . It's none of our damn business.”

After the Watershed story was published, the Delaware Valley Agricultural Society on Thursday issued a statement: "We are concerned regarding recent articles that have appeared in the press relative to Confederate flags being permitted at this year’s Delaware County Fair. While we strongly believe some of our director’s comments regarding the issue were taken completely out of context, the fair board wants to clarify that vendor contracts for this year’s fair were finalized and signed several months ago. With this being said, we simply cannot ban the flags; however, this does not mean we condone them, either. The public should be aware that we are sensitive to their concerns and will be closely reviewing our policies regarding this topic for the 2016 Fair Season."
Written by Tim Mandell Posted at 7/31/2015 01:03:00 PM