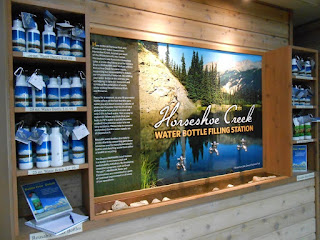 National Park Service officials said this week that even if Congress bows to pressure from water-bottling firms and threatens to cut off federal money to parks for banning disposable plastic water bottles, the Park Service will continue to encourage parks to halt water bottle sales, Lisa Rein reports for The Washington Post. (Park Service photo: water refilling station at Denali National Park in Alaska, which no longer sells bottled water)

National Park Service allowed its parks to replace sales of disposable water bottles with refillable ones in an attempt to reduce trash. That move didn't sit well with water-bottling firms, who lobbied Congress to block the move, resulting in an amendment to a House spending bill that would kill the policy. About 20 parks have switched to refilling stations.

"Park officials say they have such strong support for these bans that they would go it alone with help from friends and allies: the nonprofit groups that donate to park projects and the companies that have been selling the bottled water in the first place," Rein writes. Shawn Norton, the Park Service’s branch chief for sustainable operations and climate change, told Rein, “We believe there are plenty of workarounds. We believe our friends groups and our concessionaires will step up if needed to fill this need.” (Read more)
Written by Tim Mandell Posted at 7/30/2015 04:29:00 PM