Rural African American women in the Black Belt and Mississippi Delta have higher rates of poverty than white women and lag behind their white counterparts when it comes to employment, health, education, transportation and access to quality grocery stores and restaurants, says “Unequal Lives: The State of Black Women and Families in the Rural South,” a report by the Southern Rural Black Women’s Initiative, which covers 77 of the nation's poorest rural counties in Alabama, Georgia and Mississippi. (Mississippi State Department of Health map: Mississippi Delta)

The report states: "For women and children living in the rural South, poverty is the result of unequal social, political and economic conditions— failing school systems, high levels of unemployment, poor public infrastructure and housing and the lack of access to quality healthcare—that have persisted over many decades." (USDA map: Poverty rates) 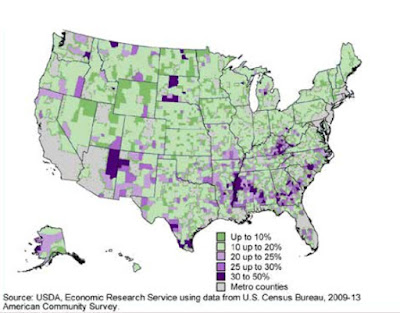 The report, which has a wealth of information about the region, can be accessed by clicking here.
Written by Tim Mandell Posted at 7/29/2015 02:52:00 PM