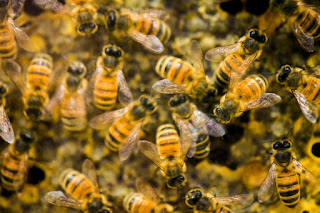 "More than 70 percent of pollen and honey samples collected from foraging bees in Massachusetts contained neonicotinoids, a type of insecticide that has been linked to colony collapse disorder," said a study published this week in The Journal of Environmental Chemistry, Sindya Bhanoo reports for The New York Times. (Associated Press photo by Andy Duback)

The study consisted of 219 pollen samples and 53 honey samples from 62 hives in 10 counties in Massachusetts, Bhanoo writes. Honeybees, which pollinate $15 billion worth of crops, lost 42.1 percent of colonies last year, but overall colony numbers are the highest in 20 years. The study is behind a paywall.
Written by Tim Mandell Posted at 7/27/2015 04:53:00 PM