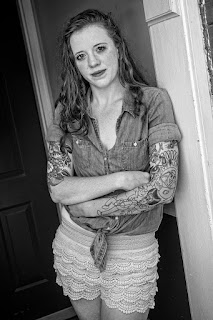 Earlier this year Bristol, Tenn., photographer Malcolm Wilson began a Facebook page, Humans of Central Appalachia, to profile the people of Appalachia, Cassandra Sweetman reports for WCYB-TV. Wilson said he based the idea on the Humans of New York project. He told Sweetman, "It used to be about the photography; now it's more about the stories. Just to hear these people's stories and be able to share them with the world." (Wilson photo: Hailee Dietz of Big Stone Gap, Va.)

In only eight weeks the page has garnered more than 14,500 likes, Sweetman writes. "For Wilson, everyone has a story, and each is worth telling." Wilson told her, "It's incredible to see the different variety, the types of people we have. Every single one—you never know what somebody's going to tell you." (Read more)
Written by Tim Mandell Posted at 7/27/2015 04:53:00 PM