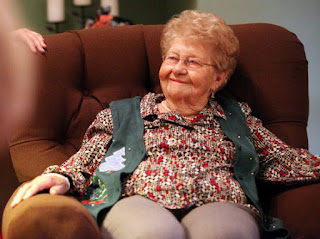 Mildred Browder Hughes has been at the forefront of community journalism in South Carolina for six decades. Hughes, who recently turned 90, has been writing at least one story and one column the the Weekly Observer and the Lake City News & Post for 61 years, Dianne Owens reports for the News & Post. (Observer photo by Matt McColl: Hughes)

"First, she wrote about family trips, the good ones and the bad, and garden parties and weddings and teas; then came her crime and political stories," Owens writes. "Ms. Mildred, as she is affectionately known by many (and yes, she has lots of other nicknames, too), has been the consummate reporter. She has been doggedly determined to get her byline in each week of the Weekly Observer since 1973."

Hughes wrote a column last week about her first byline, which was about a business trip she took with her husband to Florida. Here's an excerpt:


The first time my byline appeared in print was in the old "News and Courier," now the "Post and Courier" in September, 1954. My husband, Price, was going on a business trip to Minneapolis, Minn. His employer, Dexter Stuckey, was having him go by plane for a week of schooling on a particular line of products they were carrying, Marquette, if my memory serves me right.

The summer before this, the company was sending him to Gainesville, Fla., specifically to repair a dishwasher a customer was having a problem with. The customer had purchased the dishwasher a year before but could not find a service man anywhere to correct the problem. The customer, who happened to be one of the Stuckey sisters, was visiting her family here.

When we got home, I wrote an account of our trip, sent it to the News and Courier and they published it with my byline. Over the years I have become so byline conscious that every picture that is published or every story I read in a newspaper or other publication, I make sure to read the byline to see if it is by someone I know, have known in the past or just recognize from previous writings.