Last week California Democratic Gov. Jerry Brown signed a vaccination law, barring parents from abstaining from having their children vaccinated because of religious or personal beliefs, a move that largely affects the state's rural areas. Mississippi and West Virginia are the only other states to ban vaccination waivers based on religious beliefs. 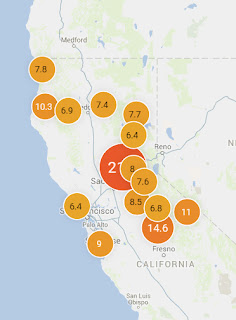 "Beginning with the 2016 school year, the new law could affect more than 80,000 California students who annually claim personal belief exemptions," Phil Willon and Melanie Mason report for the Los Angeles Times. "Only medical exceptions will be allowed for those entering day care and kindergarten. Children with physician-certified allergies and immune-system deficiencies, for example, will be exempted. Parents can still decline to vaccinate children who attend private home-based schools or independent studies off campus." (California Vaccination Rates: Top 15 counties with highest personal belief exemption rates. For an interactive version, click here)

During the 2014-15 school year, 89.4 percent of of the 434,922 children 2 years to 4 years and 11 months of age enrolled in reporting child care facilities received all required immunizations, reports the California Department of Public Health.

"According to health standards, coverage rates must remain in the 92-94 percent range to ensure herd-immunity against measles, which involves maintaining a threshold level of vaccination across a community that protects even the unvaccinated," reports California Vaccination Rates.
Written by Al Cross Posted at 7/06/2015 03:54:00 PM