At the heart of a federal lawsuit filed by environmental activists against Peabody Energy is a 44-year-old protest song that has bothered the company so badly for so long that it has asked the judge to strike lyrics from the song from the lawsuit, Ben Neary reports for The Associated Press. 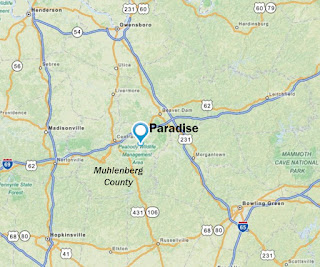 Defendants Thomas Asprey and Leslie Glustrom of Boulder, Colo., claim they were jailed for demonstrating at a company shareholders' meeting in Wyoming, Neary writes. The lawsuit uses lyrics from the 1971 John Prine song "Paradise," which was written about Paradise, Ky., a Western Kentucky town that was once home to his parents and now a Tennessee Valley Authority power plant. (MapQuest image: Paradise, Ky., can still be found on some maps despite not existing since 1967)

"Lawyers for Peabody filed a 15-page brief with U.S. District Judge Scott Skavdahl in Casper last week urging him to strike the lyrics and other aspects of Asprey and Glustrom's complaint the company claims are 'irrelevant, immaterial, impertinent and/or inflammatory,'" Neary writes.

"The company stated the plaintiffs are 'attempting to shame Peabody and attack the energy industry by citing to song lyrics that tarnish Peabody's name . . . These allegations rise to the level of absurdity, as they have no bearing whatsoever on the facts in this case, and, accordingly, should be stricken."

The song says, in part:


"When I was a child my family would travel
Down to Western Kentucky where my parents were born
And there's a backwards old town that's often remembered
So many times that my memories are worn.

[Chorus:] And daddy won't you take me back to Muhlenberg County
Down by the Green River where Paradise lay
Well, I'm sorry my son, but you're too late in asking
Mister Peabody's coal train has hauled it away"