The organization, AML Policies Priorities Group, "urged Congress to pump more money into the program, extend a coal industry tax that funds the cleanups and focus spending on Appalachian states, where the most abandoned mines are and where communities have been hard hit by mine closures and layoffs," Ward writes.

The report states: “Due to the fact that a majority of the country’s abandoned mine sites lie in Appalachia, the transition in this region is vital context for AML reform. The region is experiencing unprecedented economic decline, environmental damage and inequality. An economic transition in Appalachia is inevitable, and in that inevitability communities see an opportunity to create a new economy that is just, sustainable, and works by and for Appalachians.” (AML graphic) 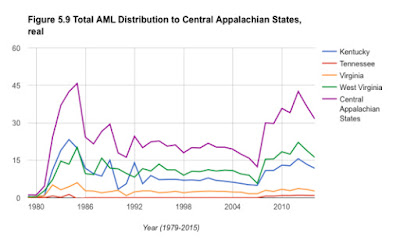 The report says that the AML program "has so far cleaned up $5.7 billion worth of abandoned mine problems, including nearly 800,000 acres of damaged land and water across the country. In 2013 alone, the program had a total economic impact of $778 million and created more than 1,300 jobs, the report said," Ward writes. There is at least $9.6 billion in site reclamation left to be done, the report said.

"As part of his proposal for the 2015-16 federal budget, President Obama proposed spending another $1 billion over five years from the AML program," Ward writes. "That money would be targeted for projects based on economic factors, such as the unemployment rate of coal-mining regions and the number of remaining abandoned mines, where reclamation projects are linked to 'job-creating economic development strategies that would help revitalize impacted communities,' the White House has said. So far, congressional committees have moved forward with only a $30 million pilot project for such spending, a figure that coalfield citizen groups say isn’t nearly enough." (Read more)
Written by Tim Mandell Posted at 7/10/2015 12:17:00 PM