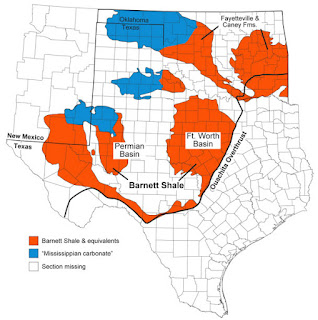 "The majority of these emissions are from a small but widespread number of sources across the region’s oil and gas supply chain," EDF reports. "These emissions come from the sort of leaks and equipment malfunctions that are relatively easy to prevent with proper and frequent monitoring and repair practices."

Researcher said "that at any given time, roughly 75 percent of the methane emissions from production sites in the Barnett Shale tend to come from a set of elusive and dispersed sources," EDF reports. "Higher emissions from these sites are often a result of avoidable operating conditions such as equipment leaks and tank venting that are relatively easy to prevent with frequent monitoring and repair practices." (Read more)

"Nine of the 11 studies were published for the first time on Tuesday (the other two were published online several months ago but still considered part of the Barnett campaign)," Lisa Song and Zahra Hirji report for InsideClimate News. "One of the nine papers summarizes the campaign's main findings." For a link to the eight new papers, click here.
Written by Tim Mandell Posted at 7/09/2015 01:05:00 PM