Federal health reform is leading to estimated annual savings in birth control of $1.4 billion, says a study by researchers at the University of Pennsylvania published in the July issue of Health Affairs. "The average out-of-pocket expense for a prescription for the pill fell from $32.74 in the first six months of 2012 to $20.37 in the first six months of 2013 (a decline of 38 percent), and out-of-pocket expenses for an IUD insertion fell from $262.38 to $84.30 (a decline of 68 percent)."

Unwanted pregnancies are a major concern in poor and rural areas, especially among rural girls ages 15-19, whose birth rates are one-third higher than their urban counterparts. A Colorado program that offers poor women and rural teens intrauterine devices and implants that prevent pregnancy for several years saw its teen birth rate drop 40 percent from 2009 to 2013.

Lead author Nora V. Becker said, “We estimate that the ACA is saving the average pill user $255 per year, and the average woman receiving an IUD is saving $248. Spread over an estimated 6.88 million privately insured oral contraceptive users in the United States, consumer annual contribution to spending on the pill could be reduced by almost $1.5 billion annually.” 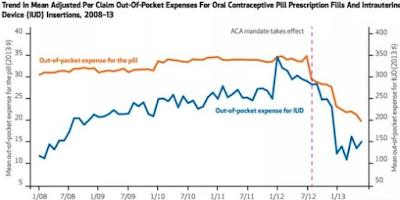 As part of Obamacare, "a woman should be able to fill a prescription without opening her wallet," Danielle Paquette reports for The Washington Post. "Not all brands, however, are required to be covered with no cost sharing. Some insurance plans have failed to comply with the law, the National Women's Law Center recently found. And some women in the study’s sample were enrolled in grandfathered plans not yet subject to the mandate or whose employers did not participate for religious reasons."

"Health economists say the financial barrier to birth control drives up unintended pregnancies and, ultimately, the taxpayer burden," Paquette writes. The monthly co-pay for pills, though typically under $50, adds up. And the cost of an IUD, arguably the most effective method on the market, can reach $1,000." (Read more)
Written by Tim Mandell Posted at 7/09/2015 01:06:00 PM