Colorado has found a way to reduce unwanted pregnancies among teens, poor women

Rural girls between the ages of 15-19 have birth rates one-third higher than the rest of the country, according to a report by the National Campaign to Prevent Teen and Unplanned Pregnancy using data from 2010, the most recent year it was available. 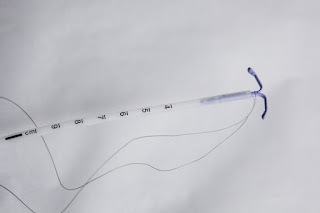 Colorado officials have found a way to reverse the trend, with the overall rate of teen births dropping 40 percent from 2009 to 2013 and the rate of abortions dropping 42 percent, Sabrina Tavernise reports for The New York Times. "There was a similar decline in births for another group particularly vulnerable to unplanned pregnancies: unmarried women under 25 who have not finished high school." (NYT photo by Benjamin Rasmussen: An intrauterine device, which prevents pregnancy for several years)

The state's solution was to offer teenagers and poor women "free intrauterine devices and implants that prevent pregnancy for year,"  Tavernise writes. "About one-fifth of women ages 18 to 44 in Colorado now use a long-acting method, a substantial increase driven largely by teenagers and poor women," compared to about 7 percent nationally. But funds for the program are running out, and not all plans covered by federal health reform provide free contraception.

"In 2009, half of all first births to women in the poorest areas of the state happened before they turned 21," Tavernise writes. "By 2014, half of first births did not occur until they had turned 24, a difference that advocates say gives young women time to finish their educations and to gain a foothold in an increasingly competitive job market."

Isabel Sawhill, an economist at the Brookings Institution, told Tavernise, “If we want to reduce poverty, one of the simplest, fastest and cheapest things we could do would be to make sure that as few people as possible become parents before they actually want to.”

That's especially true in places like rural Huerfano County, which ranks second to last in the state in life expectancy, Tavernise writes. Debbie Channel, the manager of the Spanish Peaks Regional Health Center’s Outreach and Women’s Clinic, told Tavernise, “If you get pregnant here, you are stuck." (Read more)
Written by Tim Mandell Posted at 7/06/2015 03:54:00 PM