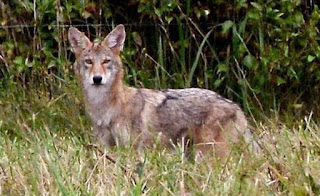 Coyotes are helping protect bird and small mammal populations by keeping cats away, says a study by North Carolina State University researchers published in the Journal of Mammalogy. The study, which analyzed 2,100 sites, found that cats were 300 times more likely to to be detected in residential areas than in parks where coyotes are more likely to roam. The more likely coyotes were in the area, the less likely cats were to stray into those areas. (News & Observer photo by Chuck Liddy: Coyote on a North Carolina farm)

The importance of the study is that cats are estimated to kill up to 4 billion birds and 22 billion small mammals a year in the U.S., Rose Rimler reports for The News & Observer. "Cats often prey on common introduced species, such as Norwegian rats. But they are thought to be devastating to native, at-risk species, especially on islands, where feral cats have been linked to extinctions." Coyotes are more likely to eat larger animals and fruit, rather than birds, lead author Roland Kays said.

Jonathan Cawley, editor-in-chief of the North Carolina Predator Hunters Association, disagreed with the study's conclusion that coyotes are good for the ecosystem, Rimler writes. Cawley told her, “Yeah, coyotes can help with the feral cat population, I would definitely agree with that. But I think coyotes are a much bigger problem than cats . . . I’ve never seen a cat tear a calf out of a mother cow when they’re giving birth." He also said coyotes "compete for deer, kill pets and prey on the native fox population."
Written by Tim Mandell Posted at 7/06/2015 03:54:00 PM