The federal government's Office of Special Counsel is investigating allegations from whistleblowers that $48 million—some of which was intended to secure water for drought-stricken fish in southern Oregon and Northern California—went instead to farmers, ranchers and other parties, Lisa Rein reports for The Washington Post. Farmers and ranchers have long fought with environmentalists and Indian tribes over the scarce water supply in the Klamath Basin, one of the largest watersheds in the western U.S. 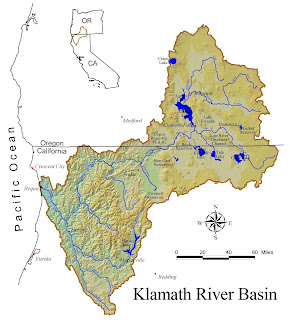 Public Employees for Environmental Responsibility (PEER), a watchdog group, said two biologists for the U.S. Department of the Interior’s Bureau of Reclamation, which supplies farmers with irrigation water and farmland in the Klamath Project, became suspicious "a little more than a year ago of a contract between the bureau and an organization called the Klamath Water and Power Agency," Rein writes. (U.S. Department of the Interior graphic)

"PEER says at least some of the $48 million contract was supposed to pay for a feasibility study for fish and wildlife of whether farmers could use groundwater instead of pulling water from the rivers. But instead, the group says, the money was used for office space, equipment, salaries and other expenditures to defray expenses of the company, an association of Klamath Project irrigators," Rein writes. "The biologists discovered that money also was used to pump large amounts of groundwater to supply farmers during drought years until private wells went dry. All of these expenditures were made without any apparent legal authority to do so, PEER claims."
Written by Tim Mandell Posted at 7/09/2015 01:04:00 PM