The oil and gas industry is discovering that horizontal wells used in hydraulic fracturing operations during the boom in U.S. shale fields contain more reserves than previously thought, leading to greater use of a practice called refracking, Dan Murtaugh, Lynn Doan and Bradley Olson report for Bloomberg. Analysis by Wood Mackenzie Ltd and ITG Investment Research found that "fields could actually contain enough reserves to last about 50 years." 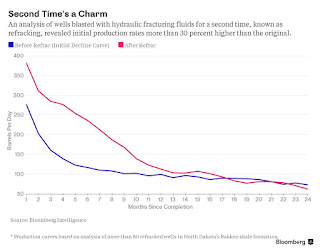 "A study by Bloomberg Intelligence of about 80 wells that were originally tapped in North Dakota’s Bakken formation in 2008 or 2009 and then refracked again years later shows a clear pickup in output," Bloomberg reports. "The wells on average produced more than 30 percent more oil in the month after the refrack than they did after the original completion, according to analysts." (Bloomberg graphic: An analysis of wells blasted with hydraulic fracturing for a second time)

"While these kinds of increases are important to traditional drillers, they’re crucial in the shale industry, where output can start falling within days of a well being tapped," Bloomberg reports. R.T. Dukes, an upstream analyst at Wood Mackenzie in Houston, "estimates that there are about 100,000 horizontal wells that could be restimulated."

Some risks are involved, Bloomberg reports. "If poorly executed, the maneuver could take oil from the producing zones of other wells, or worse yet, ruin a reservoir. Then there’s the concern that some industry analysts have that a refrack only accelerates the flow without increasing the actual total output over the life of the well. EOG is among the drillers that remain reluctant to start using the procedure." (Read more)