Rural counties in the Lower Mississippi Delta, west Central Appalachia and eastern Virginia/North Carolina have the nation's highest rates of colorectal cancer deaths, says a study published on Wednesday in Cancer Epidemiology, Biomarkers & Prevention, a journal of the American Association for Cancer Research. Researchers identified those three areas as hotspots for colon cancer. 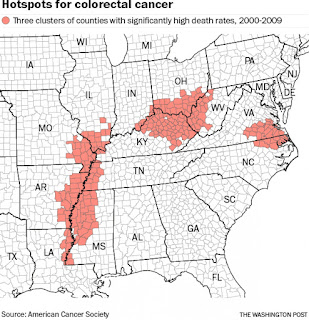 The study, which used data from 2009-2011, found that the rates in 94 counties in the Lower Mississippi Delta were 40 percent higher than in non hotspot areas. That area consists of 27 counties in Mississippi, 17 in Arkansas, 16 in Illinois, 15 in Missouri, 10 in Tennessee, six in Louisiana and three in Kentucky. (Washington Post graphic: Hotspots for colon cancer deaths)

"Researchers don’t know why rates in these three primarily rural regions are so high, but they tick off several underlying factors: high poverty, unemployment and obesity rates; low education and health-literacy levels; poor access to health care; and lower cancer-screening rates," Lena Sun reports for The Washington Post. "They note that as of March, only six of the 12 states in these high-risk regions had expanded Medicaid coverage under the Affordable Care Act to include more low-income adults."

"Most disturbing are the data for black men in the lower Mississippi Delta, said Rebecca Siegel, an epidemiologist with the American Cancer Society and one of the authors," Sun writes. "The colon-cancer death rate increased by 3.5 percent every year for black men in that region between 1970 and 1990 and has since remained unchanged."
Written by Tim Mandell Posted at 7/10/2015 12:17:00 PM