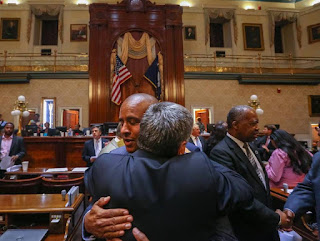 The Confederate flag is coming down in South Carolina. The state House voted 94-20 today to remove the flag from the South Carolina State House grounds, where it has flown for five decades, Jim Self reports for The State in Columbia, S.C. (State photo by Tim Dominick: Rep. Todd Rutherford and Rep. Leon Stavrinakis celebrate the passing of the bill)

Gov. Nikki Haley, who asked for the flag to be removed after nine African Americans were killed in a historic Charleston church last month and a white suspect with ties to hate crimes was arrested for the murders, will hold a bill signing at 4 p.m. today, Self writes. The flag could be taken down as early as Friday. Haley said in a Facebook post: “It is a new day in South Carolina, a day we can all be proud of, a day that truly brings us all together as we continue to heal, as one people and one state.” (Read more)
Written by Tim Mandell Posted at 7/09/2015 01:05:00 PM