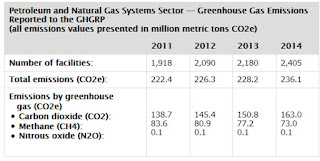 "Reductions in methane emissions appear to be the result of existing regulation, and further cuts will be made possible only by additional rulemakings, said Matt Watson, associate vice president of the Environmental Defense Fund's climate and energy program," King writes. "A table toward the bottom of EPA's energy industry profile indicates that the bulk of emissions reductions between 2011 and 2014 came from gas well completions and workovers, a regulated source, he said." (EPA graphic)

Watson said in a statement, "This data shows that regulations work and promises of voluntary action don't. The largest methane reductions come from a practice that is subject to national standards, while the biggest increases come from sources that remain largely unregulated." (Read more)
Written by Tim Mandell Posted at 10/07/2015 11:45:00 AM