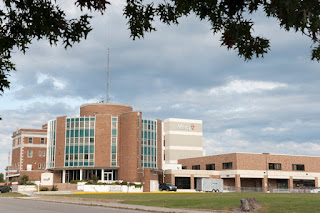 This weekend Mercy Hospital Independence in southeast Kansas will become the 58th rural hospital to close since 2010, "joining dozens of rural hospitals around the country that have not been able to withstand the financial and demographic challenges buffeting them," Mitch Smith and Abby Goodnough report for The New York Times. "The hospital and its outpatient clinics, owned by the Mercy health care system in St. Louis, was where people in this city of 9,000 turned for everything from sore throats to emergency treatment after a car crash. Now, many say they are worried about what losing Mercy will mean not just for their own health but for their community’s future." (NYT photo by Amy Stroh)

"The closings have accelerated over the last few years and have hit more midsize hospitals like Mercy, which was licensed for 75 beds, than smaller “critical access” hospitals, which are reimbursed at a higher rate by Medicare," Smith and Goodnough write. "These institutions are often mainstays of small communities, providing not just close-to-home care but also jobs and economic stability." Mercy had 8,000 visits to its emergency room last year.

"On Thursday, just a day before the main hospital building was to close, a Mercy spokeswoman said another health system had tentatively agreed to open an urgent care clinic in Independence and take over most of Mercy’s outpatient operations but not inpatient services or the emergency room," Smith and Goodnough write. "An earlier plan for another hospital to take over some of Mercy’s operations here fell through last month."

"Mercy’s problems attracted notice in Topeka, the state capital, as some lawmakers renewed calls on the state to expand Medicaid under the Affordable Care Act, a move that would have pumped an estimated $1.6 million a year into the hospital’s coffers," Smith and Goodnough write. "But Gov. Sam Brownback, a Republican, remained steadfastly opposed to the idea. Hospital officials said the Medicaid funds would have helped significantly but probably would not have ensured Mercy’s long-term survival."

"Two Republican state legislators from Independence, Sen. Jeff King and Rep. Jim Kelly, said they hoped some version of state-based Medicaid expansion would seriously be considered in the next legislative session to help prevent more hospital closings," Smith and Goodnough write. "King said that while he still opposed a straight expansion of Medicaid, he was open to the type of alternative model that Indiana and several other Republican-led states have pursued." (Read more)
Written by Tim Mandell Posted at 10/09/2015 12:15:00 PM