"More than 210 work-related deaths occurred on Minnesota farms from 2003 to 2013—an increase of more than 30 percent when compared with a decade earlier," Jeffrey Meitrodt reports for the Minneapolis Star Tribune as part of its series "Tragic Harvest." 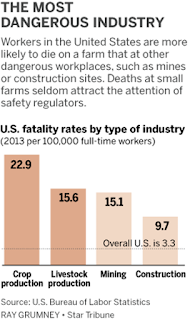 One problem is that farm safety rules are not enforced, Meitrodt writes. "Farmers are supposed to follow the same kind of safety rules that apply on other work sites. But Congress has routinely exempted farms from federal oversight if they do not employ at least 11 workers. Most fatal accidents happen at these smaller operations, not mega-farms or giant dairies, and receive little scrutiny. In Minnesota, state regulators have investigated just six of 210 farm deaths in recent years, records show. That’s a typical rate in the Midwest. By comparison, state and federal regulators typically review about 90 percent of construction fatalities across the U.S."

"Roughly half the accidents in Minnesota occurred when a farmer was working alone," He writes. "In many of those cases, farmers were not found for hours, delaying the arrival of medical attention and possibly turning treatable injuries into fatal ones. One of the most common mistakes involved malfunctioning equipment. In 25 accidents, farmworkers died while they were trying to fix a broken belt or make other repairs without taking proper precautions, often while the equipment was still running."

Another problem is the use of older tractors that are not equipped with rollover protection, he writes in another story in the series. "More than 1,700 U.S. farmworkers died in tractor accidents from 2003 to 2013, and the most common thing to go wrong was a rollover. Those accidents accounted for 40 percent of all tractor fatalities—including at least 30 in Minnesota."

"There is no doubt about the effectiveness of roll bars and cabs, which create a protective zone around an operator. According to the National Institute for Occupational Safety and Health, the devices are 99 percent effective in preventing death or serious injury in a tractor overturn when used with a seat belt. If every tractor in the U.S. had rollover protection, the institute predicts, nearly 1,000 lives could be saved over the next 10 years." (Tribune graphic) 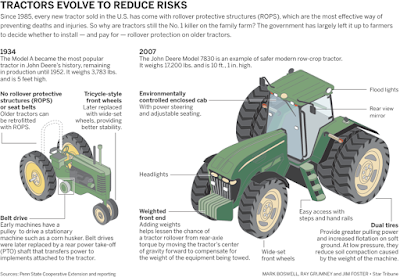