Midwestern farms could learn from Washington, where strict enforcement of rules is saving lives

Mandating and enforcing workplace safety rules has saved lives on Washington farms, while lives continue to be unnecessarily lost in Midwestern states where rules are less strict, Jeffrey Meitrodt reports for the Minneapolis Star Tribune as part of its series "Tragic Harvest." "Farmers in Washington have embraced the nation’s most comprehensive agricultural safety program, an initiative that contrasts sharply with the hands-off approach that prevails in much of the Midwest." 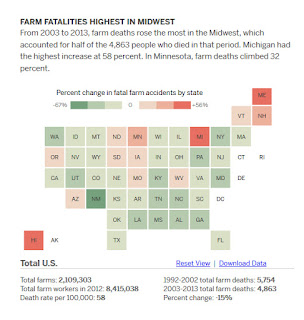 "Unlike most farm belt states, where agricultural deaths are rarely investigated, Washington regulators are usually at the scene after an agricultural worker gets killed," Meitrodt writes. "Washington is one of three states that enforce safety rules on farms with fewer than 11 workers. Washington also provides consulting services to small farms that wouldn’t qualify for such help in other states."

"The results are stunning," Meitrodt writes. "Despite having a larger farm workforce than any state in the Midwest, Washington has reported a total of 63 farm deaths since 2003. By comparison, Minnesota, Iowa and six other Midwestern states each have had more than 200 work-related farm fatalities during that time. Of the 47 states that reported at least one farm death in the past decade, Washington has the nation’s lowest fatality rate. In some years, the state has gone without a single death linked to a tractor rollover, a common cause of fatalities elsewhere."

"Last year, Washington consultants visited 294 agricultural operations, including dozens of farms in the Yakima Valley, the state’s agricultural heart. By comparison, Minnesota has provided free consulting to 10 farms since 2010," Meitrodt writes. "If all states followed the Washington model, the lives of about 1,000 farmworkers could be saved in five years, according to a study in the American Journal of Industrial Medicine. Farming remains one of the nation’s most dangerous occupations, generating an average of more than 400 work-related deaths each year." (Read more)
Written by Tim Mandell Posted at 10/07/2015 10:05:00 AM