Young, poor Central Appalachian adults are some of the nation's most sleep-deprived, study says

Young people in some of the nation's most economically distressed Appalachian counties are the nation's most sleep deprived, according to county-level data from a study by the Centers for Disease Control and Prevention. The study was taken from a 2009 survey that asked 432,000 people how many times over the past 30 days they felt that they didn't get enough sleep or rest. Respondents were separated into two categories based on people who reported poor sleep on fewer than 15 days and those who reported poor sleep on more than 15 days, Christopher Ingraham reports for The Washington Post.

"The nation's biggest cluster of bad sleep ended up in the heart of Appalachia and in a cluster of counties in Ohio, West Virginia, Kentucky, Virginia and Tennessee," Ingraham writes. "In some of these counties, 40 to 50 percent of the sample—and even higher, in some cases— reported difficulty sleeping on at least half of the days in the previous month. By contrast, the research also identified a number of 'coldspots' when it comes to sleep deficiency—places where rates are below average. Wisconsin has a number of these counties, as does Northern Virginia. In many of these counties, rates of sleep difficulty fall below 20 percent."

"Researchers looked at a number of social and demographic factors to see whether anything correlated—obesity, income, education, drinking rates, overall physical and mental health," Ingraham writes. "They found, interestingly, that 'relatively younger individuals of lower socioeconomic status and poorer health were more likely to live in hotspot counties.' People who were generally younger, poorer and in worse health were more likely to live in places with high rates of bad sleep." (For an interactive map click here) 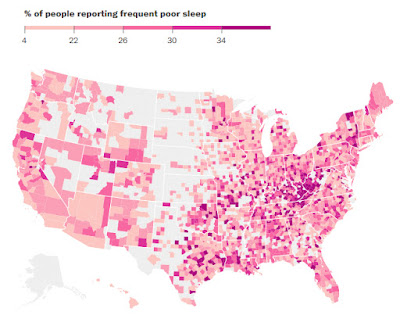