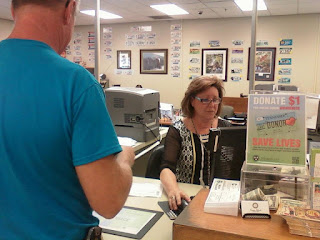 While Kim Davis, County Clerk in Rowan County, Kentucky, has grabbed national headlines and been ridiculed on Saturday Night Live for refusing to issue marriage licenses based on religious objections, most of the nation's 3,100 clerks have quietly followed the law with little fanfare, Tim Marema reports for the Daily Yonder. (Andy Brusseau photo: Evonne Hoback, county clerk of McMinn County, Tennessee)

Evonne Hoback, clerk of Tennessee’s McMinn County, a rural county that lies between Knoxville and Chattanooga in the southeast portion of the state, told Marema, “Within 30 minutes of the Supreme Court ruling, we had a phone call from someone in the LGBT community asking what we were going to do about same-sex marriage licenses. I assured them that all systems were go as soon as another agency was ready to roll with the computer system.”

Hoback said the only holdup was that "the state needed to change labels on the standardized electronic form to accommodate same-sex couples—for example, using 'surname' instead of 'maiden name,'" Marema writes. "The state and McMinn County were ready to take applications the same day as the court ruling on June 26, Hoback said." She told Marema, “We just did it without pomp and circumstance. It’s the law, and our office takes the law very seriously . . . We are here to serve people. We are here to help people. This is a public-service office . . . My responsibilities are to keep our tax dollars safe, do a good job and stay within my budget. It’s not my job to judge the world.”

While clerks other than Davis have refused to issue marriage licenses, most have complied with the law, Marema writes. "Other clerks like Wayne Nabors in Putnam County, Tennessee, have issued same-sex licenses, even though they disagree on religious grounds with the Supreme Court ruling. He told reporters, 'I have a statutory authority and a job to do.'" (Read more)
Written by Tim Mandell Posted at 10/07/2015 11:00:00 AM