Bernie Sanders trying to change red back to blue, eyes rural voters who turned against Obama

Sen. Bernie Sanders (I-Vt.) is aiming his presidential campaign at rural counties—like those in Appalachian West Virginia—that favored Democratic candidates before President Obama was elected, David Weigel reports for The Washington Post. Sanders is also looking to win over a state that overwhelmingly voted for Hillary Clinton over Obama in the 2008 primary. 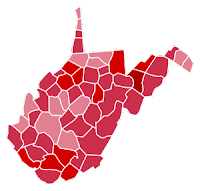 "West Virginia has rejected the Obama-era Democratic Party more dramatically than any state outside the South, with Appalachian counties that voted for Mike Dukakis and Walter Mondale turning blood red over the past eight years," Weigel writes. "But if you think it’s in places like this that the insurgent Sanders campaign faces its most formidable test, here’s what he thinks: It is also one of his greatest opportunities. The Vermont socialist thinks that white, working-class voters, the sort of people Obama once self-defeatingly said 'cling to guns or religion or antipathy toward people who aren’t like them,' are just one honest argument away from coming back." (Wikipedia map: In 2012, Mitt Romney won every West Virginia county, beating President Obama statewide 62.3 percent to 35.54 percent) 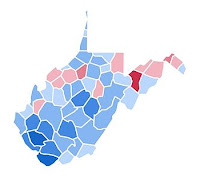 When Sanders campaigned for the first time in West Virginia on Friday, miner after miner said they basically agreed with him "more than they agreed with Clinton," Weigel writes. "Several were aware that Sanders had actually walked picket lines, something that resonated as they packed a hotel ballroom to demand that Washington fully fund UMWA pensions." Coal miner Shelley Brannon told Weigel, “For one thing, he knows what union is, and he respects it. That’s all we need is respect. He’s just a likeable fella, trustworthy. I don’t think she has the same respect for the union, and she really shot herself in the foot over, you know, all that secretive stuff.” (In 1996, President Bill Clinton won most the counties, beating Bob Dole 51.51 percent to 36.76 percent)

Former Democratic state legislator Mike Manypenny, one of the many casualties of a 2014 Republican sweep, "is running for Congress on the theory that the progressive politics he shares with Sanders—a living wage, the return of Glass-Steagall’s repealed restrictions on banks—is the way to break the conservative grip on voters’ imaginations," Weigel writes. Manypenny told Weigel, “The problem last year was that everybody focused on getting the vote out from the historic Democratic voters . . . This is something new. Barring anything happening in the Democratic debate, like Bernie stumbling badly, I don’t see anything changing the momentum. I think he wins.” (Read more)
Written by Tim Mandell Posted at 10/05/2015 01:50:00 PM