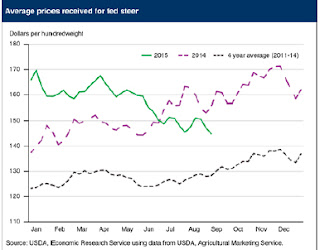 Duane Lenz, general manager of the beef industry research firm CattleFax, said the current downward swing ranks in the top three all time, reports Agri-Pulse. He said, “Next year will probably average lower than this year, so other than short-term price bounces . . . the next rally is probably not going to occur here for a while.” He said "there was 'no way to forecast' the current drop, which he said really caught the industry off guard." (Agri-Pulse graphic)

For consumers, the slide should lead to lower prices in grocery stores, reports Agri-Pulse. Lenz told Agri-Pulse, “It’ll take longer than you think just because retailers don’t know if this is a temporary or a long-term situation. We are starting to see retail prices drop, but it’s very small. I would say that before we see a big change in the supermarket, you’re probably looking at five, maybe six months.” He said it is unlikely that cattle prices will return to 2014 numbers. Agri-Pulse is subscription-only but offers a four-week free trial.
Written by Tim Mandell Posted at 10/07/2015 10:15:00 AM